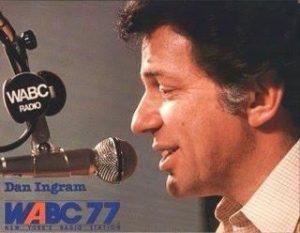 Simply stated Dan Ingram was a legend. A native of Flushing of New York, “Big Dan” began his radio career as a student at Hofstra’s radio station WHCH.  “Big Dan” started his professional career at; WNRC, (Now WVOX) New Rochelle, New York; and WALK-FM, Patchogue, New York. After stops in Connecticut, Texas and St. Louis, he returned to the Empire State on WABC-AM radio in 1961. He stayed with Musicradio WABC for years until the top 40 format changed in 1982.  Dan moved on to do a syndicated radio countdown program for CBS. He worked briefly at WKTU FM.  In 1991 “Big Dan” enjoyed a revival on the classic rock powerhouse WCBS-FM, where he stayed until 2003. He was a very successful voice-over artist on many radio and TV advertisements.

Dan Ingram was one of the most highly regarded DJs from his era. He became the standard by which others in the industry were measured. He influenced an entire generation of radio personalities.  Dan’s unique ability to talk at the beginning of a song and end right when the lyrics started set him apart. His “talk ups” were quick, funny and often irreverent.  Dan’s ability to spoof the titles of top rated songs was unsurpassed.  Dan called his listeners “Kemosabea,” an appropriate moniker for the millions of his faithful fans.   Dan was inducted into the National Radio hall of Fame in 2007.