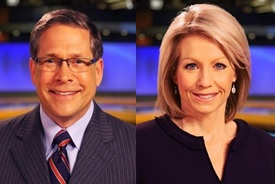 We are honored to induct into our Hall of Fame two of Rochester’s most distinguished journalists.  Doug Emblidge and Ginny Ryan have brought news to thousands of Rochester homes for a combined 66 years; have served as the co-anchors of 13WHAM News at 5:00 for more than two decades.

After graduating Syracuse University, Emblidge joined WOKR-TV in 1983 to anchor a program called NewsScope. From 1986 to 1989, Doug anchored weeknight sportscasts. In 1989, he returned to news to anchor the station’s new 5 PM newscast. In 2000, Doug took on additional duties as anchor of 13WHAM News This Morning, which became Good Day Rochester.

Ryan, a Rochester native, graduated from Buffalo State College. Two days after graduation, her career began as a reporter at WENY-TV in Elmira, New York. She was hired as a reporter by 13WHAM ABC in 1987. She anchored the morning and noon newscasts before doing the five, ten and eleven o’clock news.