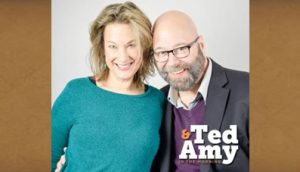 Ted and Amy in the Morning have been waking up Central New Yorkers on 93Q for 30 years. Ted Long and Amy Robbins were both born and raised in the Central New York area. Simply stated, they are an institution in Syracuse and Central New York. They have been recognized for eighteen years by the Syracuse News Times Readers Poll as Best Local Radio DJs.

Ted and Amy host numerous charity functions annually and donate much of their time to area schools and non-profit organizations. They are recipients of the “2013 Living and Giving Award” from JDRF, the International Toastmasters Communication and Leadership award, the Community Service award from Advocates of Upstate Medical University, the “Corporate Angel” award from the Mental Health Association, the Honorary Big Brothers Big Sisters award from the CNY chapter and are 2010 recipients of the Post Standard Community Achievement Award.  They, in 2011, were also named the “Official Voices of the New York State Fair” taking over PA and stage duties during the annual thirteen day run.  In 2017, they took over emcee duties for the City of Syracuse St. Patrick’s Day Parade.