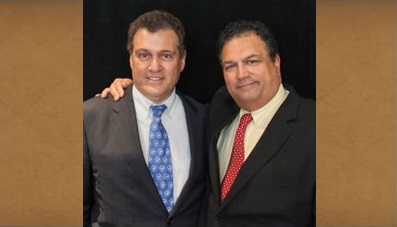 Greg and Ernie began their journey in television in the 1950’s.  Their father would take them to Rockefeller Center to see a production of the “Today Show” with Dave Garroway.  It made an impression that lasts to this day. They both earned advanced degrees at NYU.

In 1977 Greg and Ernie formed a television production and distribution company – Video Voice Inc. They produced more than 150 motion pictures establishing a partnership with MacMillan Publishing Company and the Canadian Broadcasting System.  In 1994, the FCC offered the last UHF license in Southampton and WVVH- Hamptons Television was born.  By 1995, the station began broadcasting from a studio located near the East Hampton Airport and broadcast 24 hours a day.

For 25 years Greg and Ernie have remained true to the stations mission – providing local service to the communities on Long Island. WVVH is famous for its live coverage of the Hamptons Classic Horse Show. The station has covered the Hamptons International Film Festival, the Mercedes Benz Polo Challenge, the East Hampton Sandcastle Contest, American Heart Association’s Heart of the Hamptons Ball and Long Island BOLI Awards for the best news coverage and advertising creativity on Long Island; and Emmy and Press Club of Long Island recognition.  It has provided Long Island with a variety of content such as “Outside Television” and “Youtoo America,” that cannot be found on other channels.

The station has received numerous awards for its commitment to public service.  It was honored by NYSBA for its tremendous service to Long Island during Superstorm Sandy.  It has received numerous “Serving New York Awards” for its public service campaigns supporting non-profit groups such as the Clamshell Foundation, ASPCA Horse Rescue Efforts, Riders with Disabilities, Meals on Wheels, Wounded Warriors Project and many others.

WVVH has embraced technological change. It was one of the first stations to stream programming, the first to demonstrate High Definition Television on Long Island while reaching millions of viewers world-wide.  After a long struggle, the stations can be seen on Verizon – FIOS and Altice – Optimum in the New York DMA. Innovation has been a hall mark of Greg and Ernie Schimizzi.  They hold a patent for an anti-theft trunk lock device that was used by Chrysler.

Beyond TV they are true scholars, having authored a book entitled “September 11th, 1776, Americas First Attempt at Peace.” The book details a peace conference held on Staten Island during the American Revolution.