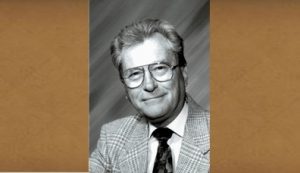 When you think of Tom Jolls, many names come to mind, weatherman, “Commander Tom,” “The Commander” and Tom.  Tom is an institution in Western New York, starting his career in 1951 in Lockport at WUSJ, then to WBEN radio and TV.  He made the move to WKBW in 1965 where he became part of “Irv, Rick and Tom” for a 24 year run on Eyewitness News.  Tom was the “weather outside” with a multitude of winter coats, the weather stick, weather guests and the weather word.  His favorite weather word for a beautiful day was “salubrious.”

Tom was the cornerstone of children’s television in Buffalo.  He created Captain Tom on “The Superman Show.” The show later became the “Commander Tom Show” and the Commander was born.  Commander Tom is one of the fondest memories of any child that grew up during the 60’s and 70’s in Western New York.  He continued the character for 26 years with his puppets.  While he never became a meteorologist, the “Commander” was the person to watch to see what the weather was outside in Western New York.  Always willing to help the community, Tom promoted backyard carnivals for Muscular Dystrophy.  Over the years his efforts resulted in significant contributions to the charity.