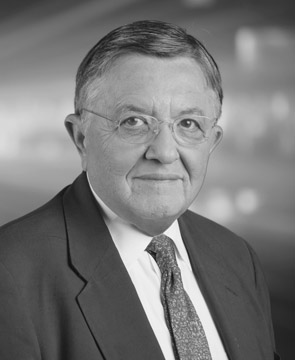 Recognized in the New York broadcast journalism community as the “reporter’s reporter,” “NewsChannel 4’s” Gabe Pressman has been with NBC 4 for more than 40 years. During his time with the station he has compiled a peerless record of investigative reporting in politics and social issues.

Pressman’s reports, interviews, hard news stories and commentaries are featured on the station’s various newscasts. He is also the host of “News Forum,” NBC 4’s news making public affairs report that airs Sunday mornings at 6:30 a.m. and again at noon.

Having invented the craft of street reporting, Pressman is recognized by the viewing audience, political and community leaders and his NBC colleagues as one of New York’s most respected journalists.

In 1947, upon his graduation from the Columbia School of Journalism, Pressman worked briefly as a reporter for the Newark Evening News. He was then awarded a Pulitzer Traveling Scholarship from Columbia, which enabled him to travel through Europe for fifteen months and to freelance feature stories for the Overseas News Agency. While in Hungary, he covered the famous trial of Joseph Cardinal Mindszenty for The New York Times and for Edward R. Murrow’s radio news program. The trial marked the first time that a primate of the Roman Catholic Church had been tried for treason in modern times.

In 1949, Pressman joined the staff of the New York World Telegram And Sun as a City Hall reporter. During his years at the paper, he covered the administrations of William O’Dwyer, Vincent Impellitteri, and Robert Wagner.

Pressman began his broadcasting career at WRCA radio as the station’s first “roving reporter” Nov. 8, 1954, and moved to WRCA’s television side (later to be WNBC) in 1956 in the same capacity, covering such major stories as the sinking of the Andrea Doria and the Weinberger kidnapping on Long Island. During that year, Pressman also anchored WRCA-TV’s “The Shell Oil News,” a five-minute local evening newscast, in which he provided the

Metropolitan area’s first major television news reporting. The program subsequently expanded to a ten-minute format when Bill Ryan and Ray Owen were added as reporters. As a result of the great newspaper strike of 1963, the station began a full half-hour evening newscast called “The Pressman-Ryan Report.”

Amid the tumult of the late sixties, he covered such major stories as the New York City blackout, the riots at the Democratic Convention in Chicago in 1968, the civil strife in Newark and New York, the Mayoral campaigns for Abraham Beame, William F. Buckley, John Lindsay, and the entrance of Robert F. Kennedy into New York politics.

In July 1972, Pressman moved to WNEW-TV (now WNYW-TV) as a general assignment reporter. During his eight years there, he wrote and hosted many specials and series, among them “The War On Cancer,” an investigation of the activities of the National Cancer Institute and the American Cancer Society that focused on the politics of cancer and “The Mood of America,” a report on the 1976 presidential election.

Since rejoining NBC 4 in 1980, he has been responsible for several award-winning programs and multi-part series, including: “The Homeless: Shame Of A City,” “The Hungry,” and “Asylum In The Streets,” three specials dealing with the plight of New York’s homeless, mentally ill and hungry people; “To Bear Witness,” a half-hour special on the gathering of holocaust survivors in Jerusalem in the summer of 1981; 1982’s “A Crisis Of Conscience,” which chronicled the turmoil within Israel over the massacre in the Lebanese refugee camps; the 1985 Democratic Presidential Primary Debate; “Ask The Governors,” an open forum with Cuomo, Kean and O’Neill telecast live in July, 1983; the New Jersey and Long Island “Town Meetings;” multiple overseas reports from Israel and timely coverage of key political issues on “News Forum.”

Between 1943 and 1946, he served in the U.S. Navy as a communications officer on the submarine chaser “PC 470” in the South Pacific, participating in the invasions of the Philippines. After the war, he was a public relations officer under Admiral John Towers, Commander-In-Chief of the Pacific Fleet, at Pearl Harbor.

Born in the Bronx, Pressman attended Morris High School, worked as a cub reporter for the Peekskill Evening Star during summer vacations, and graduated from New York University with a Bachelor of Arts degree in History and Government.

Pressman resides with his wife Vera in New York City and Putnam County.