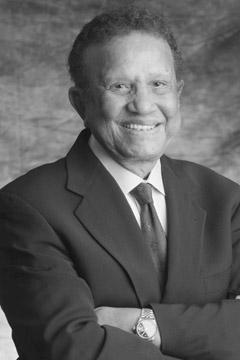 Who is Hal Jackson? Mr. Jackson is a popular radio and television personality and one of the most respected men in the communications industry. As a radio pioneer, Jackson has experienced many “firsts” that have assisted in opening doors for other aspiring Black broadcasters, musicians and performers.

Jackson has for over 30 years been Executive Producer and Host of his Talented Teens International competition which highlights the intelligence, creativity and talents of young minority women 13 – 17 year of age. The ladies are given the opportunity of displaying their talents and competing for educational scholarships, trips abroad and the opportunity of networking with young women from around the world who are
their peers. Past winners and participants are Tammi Townsend, Vanessa Williams and Jada Pinkett Smith.

The list of Hal’s honors and awards is long. Among them are being honored by President Franklin D. Roosevelt for his fund raising efforts; President Harry S. Truman, President Dwight D. Eisenhower and President John F. Kennedy, Jr. In 1989 Hal Jackson’s 50 Years of Broadcasting and his major contributions to youth and charitable causes was acknowledged by Honorable Mervyn M. Dymally of California on the floor of the House of Representatives which has become a part of the Congressional Record. There are two honors that he truly cherishes, in the spring of 1990, Mr. Jackson was honored with being the first Black (or minority) inducted into the National Association of Broadcasters Hall of Fame and in October of 1995 he was the first Black inducted into the Radio Hall of Fame. In November of 1999 Mr. Jackson celebrated 60 years of Broadcasting Leadership with a star-studded event at the Rainbow Room in New York. In 2001 Mr. Jackson was inducted in the Broadcast and Cable Hall of Fame.

Hal Jackson is the creator of the idea to make Dr. Martin Luther King Jr.’s birthday a national holiday. Because of Hal’s access to the airwaves, he was instrumental in stimulating the initial movement for the 6.5 million signatures solicited on petitions and letters submitted to Representatives John Conyers and Shirley
Chisholm on behalf of creating Dr. Martin Luther King, Jr.’s birthday as a national holiday.

This gentle and charitable man has lived a life devoted to sharing his gifts with his fellow man and woman and has always found time to help those less fortunate. It is all depicted in his autobiography “The House That Jack Built” on stands now. Perhaps his career and lifestyle can be summarized by the theme he has chosen for his radio programs — “It is nice to be important, but it is more important to be nice.”