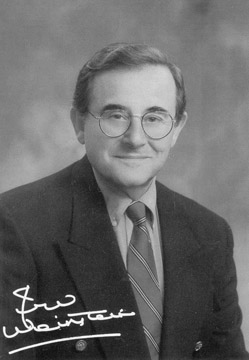 How well known is Irv Weinstein in Western NY, Southern Ontario, and Northern Pennsylvania? Some years ago, a letter arrived on the retired TV anchorman’s desk…It was simply address:

CHUM Radio in Toronto once ran an on-air promotion to have Irv elected Prime Minister of Canada, President of the US . . . or both.

Irv’s career has been a long and varied journey. His first broadcast job was in the mid 40’s while he was still in high school in Rochester. He was paid seven dollars a program as a radio actor on WHAM, more than enough to cover the cost of comic books, chewing gum and a few movies. The crowning moment of that heavy period in Irv’s early career came when an episode of NBC’s “Henry Aldrich Show” originated on a one time basis from WHAM. He did a cameo role which consisted of four words. A few weeks later, Irv got a check for $235, the last time he was paid so much money for so little work. In later years, his compensation was considerably less at broadcast outlets in Waterloo, Iowa, Portland, Oregon, San Diego, and Parkersburg and Clarksburg, West Virginia. On December 31, 1998, Irv retired, ending a 40-year career as News Director/Anchorman with WKBW Radio and TV in Buffalo. That four decade long run of ratings success is unparalleled in major broadcast market and made him a legend in the industry. Irv was the key ingredient of the anchor team at WKBW TV that included Sports Director, Rick Azar and weatherman, Tom Jolls. They were on the air together for 24 years, believed to be a world record to TV anchor teams. Irv is the recipient of numerous professional and civic awards: including 1998 inductee into the Buffalo Broadcast Pioneers’ Hall of Fame, named “Communicator of the Year” by the communicators of Western New York organization, and was once designated one of America’s top 25 local television anchors by Broadcasting Magazine. When not on the air, Irv could be found dancing at Greek Festivals, sampling fried dough at Italian festivals, milking cows at county fairs, judging art shows and beauty contests, or sailing down a snow-covered hill at a winter carnival. In addition to his broadcast work in Buffalo, Irv has worked at radio and television stations in Waterloo, Iowa, Parkersburg and Clarksburg, West Virginia, Portland, Oregon, and San Diego, CA.

On the personal side Irv has had a life-long interest in theater both as an actor and owner of a small theater in Buffalo. His appearance in the James Caan film, “Hide In Plain Sight” is so brief, his name appears second last in the cast list, just above that of a pet dog. Irv’s been blessed with a wonderful family. His wife, Elaine, is a professional artist, holds a master’s degree in city planning and has the patience of a saint. The Weinsteins have three children and four grandchildren, all of whom are brilliant and good looking.