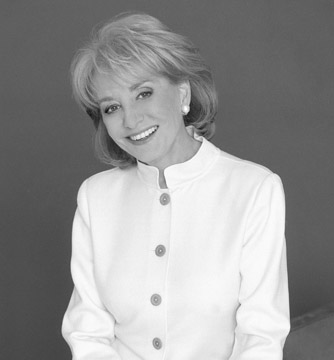 Host of “The Barbara Walters Specials”; Creator, co-host and executive producer of ABC Daytime’s “The View”Barbara Walters has arguably interviewed more statesmen and stars than any other journalist in history. She is so well known that her name and a brief biography is listed in the American Heritage Dictionary.

In September 2004, after 25 years as co-host and chief correspondent of ABC News’ “20/20,” Ms. Walters retired from the show to begin a new phase in her career at the network. She remains an active member of the news division and network, substantially increasing the number of primetime ABC News specials, in addition to her “Barbara Walters Specials.” Her most recent Special, “Heaven: Where is it and how do we get there” was the most watched news program of the week.

In her final season, Barbara Walters’ “20/20” newsmaker exclusives included the coveted first interview with Senator Hillary Rodham Clinton regarding her highly-anticipated autobiography; traveling to Cuba to interview President Fidel Castro 25 years after their first headline-making interview; Former Vice President Al Gore in his first formal interview since the controversial 2000 Presidential election; President and Mrs. Bush, who gave “20/20” the first look at the White House at Christmas; a candid conversation with media phenoms, The Osbournes; and actor Robert Blake, who spoke out for the first time since being arrested for the murder of his wife. Walters also tackled tough issues surrounding the war with Iraq, including reports on Iraqi women and children who lived through the first Persian Gulf war and now live in America.

At the other extreme, in 1999 Ms. Walters conducted the first interview with Monica Lewinsky, which became the highest-rated news program ever broadcast by a single network.

She has interviewed every American President and First Lady since Richard Nixon. She made journalism history by arranging the first joint interview with Egypt’s President Anwar Sadat and Israel’s Prime Minister Menachem Begin in November, 1977. Another of her “firsts” was an hour-long primetime conversation with Cuban President Fidel Castro — an interview which has been printed in half a dozen languages and shown all over the world.

“The Barbara Walters Specials” are continuously the top-rated specials of the year and have included such legends as Sir Laurence Olivier, Bing Crosby, John Wayne, Bette Davis and Audrey Hepburn. More recent interviews of superstars have included Julianne Moore, Nicholas Cage, Renee Zellweger, Matt Le Blanc, Diane Keaton and Billy Crystal. Ms. Walters’ “The 10 Most Fascinating People” special broadcast, launched in 1993, offers a year-end review of the most prominent newsmakers of the year, as well as the selection of the “most fascinating” individual.

Ms. Walters’ is also co-owner, co-executive producer and co-host of “The View,” recipient of the 2003 Daytime Emmy Award for “Outstanding Talk Show.”

Prior to joining ABC she appeared on NBC’s “Today Show” for 15 years. She began as a writer on the “Today Show,” and within a year became a reporter-at-large, developing, writing and editing her own reports and interviews. In 1963 she became a co-host of the program without the official title, but in 1974 NBC officially designated her as the program’s first female co-host.

Ms. Walters was a member of the NBC News team that went to the People’s Republic of China to cover the visits of President Richard Nixon in 1972 and President Gerald Ford in 1975. In addition to the “Today Show,” for five years Ms. Walters also hosted her own popular syndicated series, “Not for Women Only.” The program went off the air when she left for ABC. Early in her career she was a writer for CBS News and, before that, she was the youngest producer with NBC-TV’s New York station (WNBC-TV).

Over the years Ms. Walters has received national recognition for her work and has been the recipient of numerous prestigious honors and awards. Among these are:

A native of Boston, Ms. Walters is the daughter of the famed entertainment impresario Lou Walters and has one daughter.