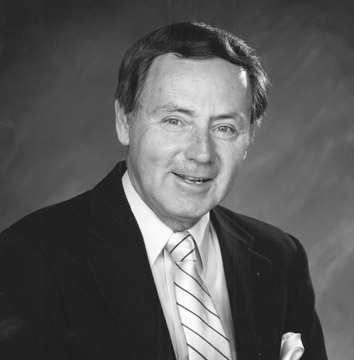 Van Miller is truly a man for all seasons. His career, spanning 55 years, is one of the most remarkable and versatile in the history of radio and television broadcasting.

After attending Fredonia State and Syracuse University, he began his play-by-play work in basketball and football at WFCB in Dunkirk and spent the better part of five years there with time out for a hitch in the US Army. During the Korean War, he did a three-hour, six-day-a-week morning show at WFCB. He then became sports director and program director. He broadcast Fredonia State basketball, did professional wrestling on radio in the era of “Gorgeous George,” “Yukon Eric” and other top pro wrestlers of the time. He did quiz shows, soap box derbies, auto racing, big band music shows, “Live with the Dorsey Orchestras,” and many others.

On a typical Saturday in the fall, Miller’s day started at five AM and finished Sunday morning at 12:30 AM. In 1955 WBEN radio and TV offered him a three-month job as a summer replacement announcer. He took the job and stayed on for 43 years never missing a day’s work, turning down offers from NBC, CBS and ABC to remain close to his mother in Dunkirk, who raised him with no help. Miller did early morning TV news at Channel Four then took over the 6:00 PM and 11:00 PM newscasts on weekends. His play-by-play at WBEN began with University of Buffalo basketball and football. He hosted a popular afternoon radio show, did on-camera commercial work for several sponsors, and did a high school TV quiz show, “It’s Academic,” for 16 years. Van also hosted a breakfast show from AM&A’s and a Saturday show for teenagers at the Rendezvous Room of the Hotel Statler.

In 1960 he became the voice of the Bills, a labor of love that would extend over 37 years and make him the longest running play-by-play man with the same team in the history of the NFL. Van’s calls have been used for years on HBO, “Inside the NFL” and all three major networks, as well as ESPN and the Pro Football Hall of Fame in Canton, Ohio. On TV he’s done three different TV bowling shows, as well as golf, tennis, boat racing and marathons. Miller is a member of the Western New York Sports Hall of Fame, the Chautauqua County Sports Hall of Fame and the Buffalo Broadcast Pioneers Hall of Fame.

Miller did Bison baseball for many years, as well as Niagara Basketball before, during and after the fabulous career of Calvin Murphy. He was the exclusive radio and TV voice of the NBA Buffalo Braves for 7 years. Van also did NCAA and NIT tournament basketball, as well as indoor soccer. In all he has broadcast more than 2500 games and sporting events and never missed a game. The long-time Channel Four sports director retired in 1998 and devoted his time since then to Bills play-by-play and commercial announcing. He’s been married 55 years to his devoted wife Gloria and has a daughter Cathy, a son Van and three grandchildren. His hobbies include tennis, golf, skiing and bike riding and working out in the gym.

In 2004 NFL officials voted Van in the Pro Football Hall of Fame in Canton, Ohio by presenting him the Pete Rozelle Award, one of only twelve network radio and TV play-by-play announcers so honored. He is in five Halls of Fame and the United States Congressional Record. Congressman Jack Quinn paid tribute to him on the floor of the House of Representatives after his final play-by-play broadcast for the Bills. Van also played a significant role in a made-for-TV football movie titled “Second String.”