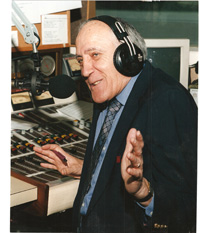 After graduating from Jamestown High School in 1944 Jim Roselle attended St. Lawrence University where he received a bachelor’s degree in business administration, while minoring in radio programming and production. It was his experience as a play-by-play broadcaster for S.L.U. football, basketball, and baseball teams that would be a springboard to a life of success.

In 1953 Roselle began his radio career at WJTN-AM in Jamestown, New York. Little did Roselle know that what started, as a part-time sportscaster job was truly the beginning of a life of excellence in broadcast and community involvement. This broadcast excellence has bestowed many career highlights upon Roselle, from world travel to London with Jamestown Community College, to the Soviet Union representing the Chautauqua Institution, with the Jamestown High School Acapella Choir to Austria, Germany and Italy, Jamestown High School Band to Macy’s Parade and Rose Bowl Parade and a week of broadcasting live from Disney World.

His style of interviewing is much different from those of other talk radio personalities. Roselle does detailed research on the people and subjects of his interviews, and his knowledge and insight often surprise and impress his guests. Roselle features “on air conversation” not just stereotype interviews.

While most known for his on-air role, it is the common person in the local community that Jim relates to most, as signified by his show’s opening, “Good morning hometown Jamestown and neighbors! Join me in a cup of happiness!” The community wakes up to his voice every day, but most are unaware of his community affiliations and passions. He has been a member of the Board of Directors for the Lucille Ball Little Theatre for over 30 years; the Jamestown Boys and Girls club for more than 25 years; and now at the James Prendergast Library. He also has been the chairman for many community events and enjoys golfing when he gets the chance.
He’s received the National Brotherhood Award from the National Conference of Christians and Jews, the Paul Harris Fellowship Award from the Jamestown Rotary Club and has received the old First Night Award from the Chautauqua Institution.

Through it all, Jim has kept his focus on one thing; the “fact that the audience wanted to be involved in local radio.”