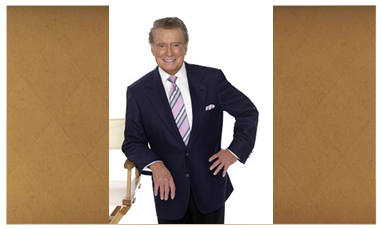 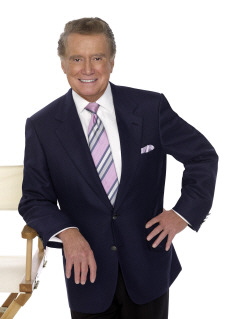 Co-Host, “LIVE! with Regis and Kelly”

As the face to which millions of Americans wake up every morning, Regis Philbin has become a cultural icon in television broadcasting.

Since Philbin first stepped in front of the camera more than 40 years ago, he has ambitiously tackled talk shows, game shows and even the literary world, with multiple best-sellers to his credit. In May 2001, the National Academy of Television Arts & Sciences honored him with a Daytime Emmy as Outstanding Talk Show Host for his syndicated program, “Live with Regis,” and another Emmy award as Outstanding Game Show Host for “Who Wants To Be A Millionaire.” He and co-host Kelly Ripa received the Daytime Emmy for Outstanding Special Class Special for hosting the 2006 “Walt Disney World Christmas Day Parade.” In Fall 2009, he broke his own existing Guinness World Record® for Most Hours on Camera, setting a new mark of 16,343 hours accumulated over his illustrious career – a career that was recognized with the Lifetime Achievement Award from the National Academy of Television Arts & Sciences at the 2008 Daytime Emmy Awards.

Early on, Philbin took “A.M. Los Angeles” from the bottom of the ratings to number one, where the show remained throughout his seven-year tenure. At the national level, he served as Joey Bishop’s sidekick on “The Joey Bishop Show” and helmed “The Regis Philbin Show,” a daily 30-minute program that received an Emmy for Outstanding Daytime Variety Series.

Currently in its 23rd season in national syndication, “LIVE! with Regis and Kelly” originated in 1983 when Philbin created “The Morning Show” for WABC in his native Manhattan. It quickly became the number one show in the market. Kathie Lee Gifford joined him in June 1985, and in September 1988 the program debuted in national syndication and the title was changed to “Live with Regis & Kathie Lee.” In 2001, Philbin was joined by Ripa, and the program entered a new era as “LIVE! with Regis and Kelly.”

Philbin took his daytime success to nighttime with ABC’s ratings juggernaut “Who Wants To Be A Millionaire” in 1999. In August 2009, ten years after making television history, the network brought back a special 11-episode anniversary run of the blockbuster game show with Philbin at the helm.

Following the initial run of “Millionaire” and the $10 million spin-off “Super Millionaire,” Philbin returned to primetime as host of the NBC summer program “America’s Got Talent.” In early 2008, he was tapped to host the red carpet arrivals show for the 2008 Academy Awards, and later that year hosted the network revival of “Password,” CBS’ “Million Dollar Password.” In June, 2010, he took on hosting duties for daytime television’s biggest night, the 37th Annual Daytime Emmy Awards, broadcast live from Las Vegas.

Although best known for his broadcasting career, music has been a lifelong passion for Philbin and his recent efforts truly can be called “labors of love.” In September, 2004, Hollywood Records released Philbin’s album of timeless songs, When You’re Smiling, produced by acclaimed producer/singer Steve Tyrell. The disc wasn’t his first musical venture – that was 1968’s It’s Time for Regis!, recorded during his days on “The Joey Bishop Show.” It took 38 years for his follow-up album, a collection of some of the greatest songs in American pop music, including “Pennies From Heaven” and “It Had to be You.” Based on the success of When You’re Smiling, Hollywood Records signed Philbin for a follow-up album of Christmas classics, also produced by Tyrell. The Regis Philbin Christmas Album, which debuted in September, 2005, features duets with Joy Philbin and Tyrell, a special appearance by Donald Trump, and was one of the season’s top-selling holiday albums.

In summer, 2009, Regis and Joy recorded their first full CD together, Regis & Joy: Just You, Just Me, which debuted in November, 2009. The album showcases great standards such as “Just in Time,” “How About You,” “I’ve Got a Crush on You” and “Two Sleepy People,” plus a stunning arrangement and performance of the classic Bacharach tune “This Guy’s In Love With You” by special guest Paul Shaffer.

In addition, for more than 25 years, Philbin regularly has performed his musical act at many of the top venues in the country. The show combines timeless music with Philbin’s wit, charm and unmatched storytelling, with an entertaining dash of audience participation thrown into the mix. Accompanied by an orchestra, he performs many of the classic standards featured on When You’re Smiling.

In 2001, Philbin received a TV Guide Award as Personality of the Year, and a Broadcasting & Cable Lifetime Achievement Award. He also was presented with a Crystal Apple Award from New York City Mayor Rudolph Giuliani for his contributions to the New York television industry. Other accolades include the Walter Camp “Distinguished American Award” at Yale University and a star on the Hollywood Walk of Fame. Philbin was the 2006 inductee into the National Association of Broadcasters Hall of Fame, and later that year was selected by the Academy of Television Arts & Sciences to be inducted into the Television Academy’s Hall of Fame.

A native of New York City, Philbin is a graduate of the University of Notre Dame and received an honorary doctorate of law degree for his contributions to Notre Dame and South Bend. Regis and Joy have two grown daughters, Joanna and Jennifer.