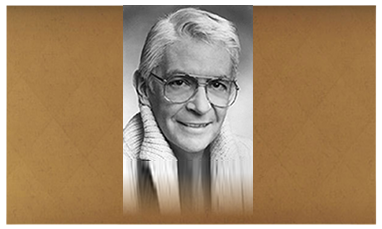 William B. Williams Born William Breitbard on 6 August 1923, in Babylon, New York, William B. Williams attended the University of Syracuse and began his radio career on WAAT-AM in Newark, New Jersey. The first job came along, as it did for many, “filling in for a deejay who had failed to show up for work.” In a few weeks, having the audacity to wear red socks to work got him fired. He quickly found another job. This one was at WNEW-AM, in New York City (“Variety”, 6 August 1986: 93). He stayed at WNEW-AM for all but four of the next 42 years. In 1959, Williams inherited “Make Believe Ballroom” from Art Ford. Ford had taken over when Martin Block left WNEW-AM for WABC-AM. WNEW-AM dropped “Make Believe Ballroom” in 1972, but revived it 1979; again, Williams was at the helm (Billboard, 16 August 1986: 10).

In an editorial aired on WVOX-AM and WRTN-FM, Bill O’Shaughnessy called, “Make Believe Ballroom,” “an oasis of style and taste” and William B., “an icon, properly restored.” The show continued until he passed away in 1986. Hard to believe it was 20 years ago.

William B. Williams respected singers and songwriters, music and musicians, and it showed. He had a permanent, perhaps profound, effect on the lexicon of pop music.

He bestowed the “Count” on Basie and the “Duke” on Ellington. Billie Holiday was “Lady Day.” Ella Fitzgerald was the “First Lady of Song.” Louis Armstrong was “Pops.” Sinatra was “Francis Albert,” the “Chairman of the Board.” Nat “King” Cole was simply “Nathaniel.” I wonder if William B. could’ve talked the “Chairman” into recording “Two Shot of Happy, One Shot of Sad”?

O’Shaughnessy views Williams as “sui generis”. He was “unique and able to be defined only in his own terms.” For more than 40 years and 12,000 broadcasts, he was “poet and bard.” William B. was a “pre-eminent spokesman for the charms and attributes” of a popular music “filled with sweetness and gentleness and love.” The words and the music were an “exquisite product of creative minds and hearts.” Nightly, William B. confirmed, “good taste knows no age or season.”

A quiet, shy man, Williams brought elegance, dignity, integrity and grace to everything he did. Whether it was playing records or hosting New York segments of the “Jerry Lewis Telethon,” William B. was comfortable with everyone, and all with him. His friends were show business people, cab drivers, waiters and priests. He was “unfailingly generous with advice and counsel to aspiring broadcasters,” says O’Shaughnessy. He squandered his name, talent and reputation across a thousand nights as the master of ceremonies of countless banquets and charity events.

Frank Sinatra said he was “simply the most generous man I know.” George Maksian, of the New York Post, called him “a class act,” in everything he did and the way he lived. He was a performer and entertainer who could not resist involving himself in the world. When Martin Luther King walked those desperate, dusty roads in Selma in the early 60’s,” William B. walked with him.

Williams did not preach or pontificate. When a situation called for it, he spoke “movingly about injustice or those occasions when we were less than kind and loving to one another.” What was left unsaid was often the most eloquent and, perhaps, most cogent. There was no “idle or meaningless chatter.” Williams respected his listeners. He understood they were thinking human beings with likes and dislikes; spouses and children; beliefs, opinions and attitudes, and above all feelings, which were too often hidden, but always vulnerable.

Thousands jammed the area around Riverside Chapel that August day to pay last respects to William B. Williams. It was not for his rating points, which were high. It was not for the honors bestowed on him during life, which were many. It was not for the monies generated for charity, which were millions. Nor was it for the sales generated for advertisers, which were tens of millions. Rather, as O’Shaughnessy says, it was because of his “contributions to the human spirit … for the quiet grace, dignity and style” he brought to radio and the job of playing records. This is what compelled taxi drivers, politicians, bookies, cops, sanitation workers and “Rockettes” to gather spontaneously. William B. Williams was a professional.