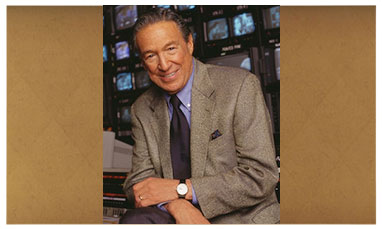 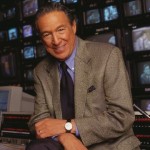 One of television’s most admired journalists, Mike Wallace first discovered broadcast journalism at the University of Michigan, and he worked at several Michigan radio stations after graduation.  He began working in television in the 1950s and became the host of Night Beat, which in 1957 became the nationally distributed The Mike Wallace Interview.

Mike became a full-time correspondent with CBS in the 1960s and co-editor of 60 Minutes in 1968.  Known for his aggressive interview style, he was never afraid to ask the tough questions. He questioned the sanity of the Ayatollah Ruhollah Khomeini in 1979, soon after the American hostage crisis began in Iran. He later challenged Russian leader Vladimir Putin about whether Russia was truly a democracy and questioned him about corruption.

Mike won 21 Emmy Awards throughout his career. He was driven by an intense desire to deliver the truth to his audience. “I’m noisy and insistent,” he once explained. “His extraordinary contribution as a broadcaster is immeasurable and he has been a force within the television industry throughout its existence,” said Leslie Moonves, president and CEO of CBS Corp.  Mike Wallace passed away on April 7, 2012.