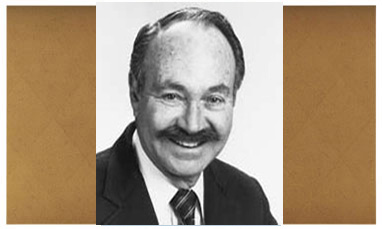 Martin “Marty” Glickman was born in The Bronx, New York in 1917.  A graduate of Syracuse University, Glickman was also an All-American football player.  He had brief careers in professional football and basketball.

Glickman joined radio station WHN in 1939 and was its sports director by 1943.  When the New York Knickerbockers were formed in 1946, Glickman became their radio announcer and remained so for 21 years.  Later, he was the National Basketball Association’s first TV announcer.  Glickman was also the first announcer for the New York Nets before the ABA-NBA merger.  His descriptions of the game, including “swish,” “top of the key” and many others became the lexicon used by all sportscasters.  He was the voice man for the sports newsreels distributed by Paramount News, between 1948 and 1957.

In the early 1960s, Glickman teamed up with the analyst Al DeRogatis, to form a legendary broadcast team for the “New York Football Giants” for the next 23 years.  He was the voice of the New York Jets for 11 years.

Glickman did pre and post-game shows for the Brooklyn Dodgers and New York Yankees for 22 years.  Glickman was often heard on WPIX-11’s telecasts of local college basketball during the winter.  As the sports director of WCBS Radio in the 1960s, he briefly resurrected the ancient broadcasting art of re-creation for New York Yankees spring training games.  When HBO premiered in 1972, Glickman announced HBO’s first telecast from Madison Square Garden. He was also the voice of the Yonkers Raceway for 12 years and did some New York Rangers broadcasts.

Glickman was a longtime mentor of broadcasters.  NBC employed him as a critic and teacher of its sports announcers.  Glickman is a member of the Curt Gowdy wing of the Basketball Hall of Fame.

Glickman was an 18-year-old member of the U.S. team in the 1936 Summer Olympics in Berlin, Germany, as a sprinter.  He had been a track star and football star at Syracuse University.  The day before he was scheduled to compete, Glickman and the only other Jew on the U.S. Olympic team that year, Sam Stoller, were replaced on the 4×100 m relay team.  Sixty-two years later, in 1998, the then-president of the U.S. Olympic Committee, William J. Hybl, honored Glickman by presenting Glickman with a plaque “in lieu of the gold medals they didn’t win” in Berlin.  Hybl noted that although there was no written proof that anti-Semitism had been at play during the 1936 Olympics, it was clearly the case.  “I was a prosecutor,” Hybl said. “I’m used to looking at evidence. The evidence was there.”