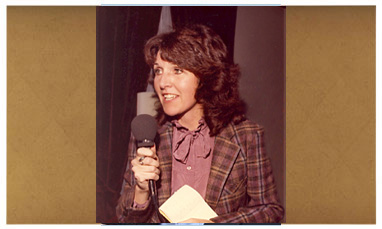 Throughout her career, Nancy led the way for women in journalism.  She became the first woman police reporter in Central New York after joining the Syracuse Herald-Journal in 1966.  She was Syracuse’s first female TV reporter when she moved to WHEN-TV (now WTVH 5) in 1967.  She picketed the Syracuse Press Club for membership, and later served as its president.  In 1970, Nancy served as press secretary at Syracuse City Hall, the first woman in that position.  She returned to Channel 5 after a year, and moved to Channel 9 (then WIXT, now WSYR) as a reporter and morning anchor in 1977.

Nancy received the Syracuse Press Club’s Lifetime Achievement Award, and was among the first group of journalists honored with a plaque on the Press Club’s Wall of Distinction in 2000. She has been honored with many awards on the local, state and national levels, and was a driving force behind countless community initiatives.

She considered her greatest legacy to be the Syracuse St. Patrick’s Day Parade. She led a small group of volunteers in putting together the first parade, March 19, 1983.  The Parade has become Central New York’s largest one-day event. The parade is “the largest St. Patrick’s Day Parade, per capita, in the world” with up to 10,000 marchers and 125,000 spectators.  A pioneering journalist and community leader, Nancy Duffy passed away in 2006.