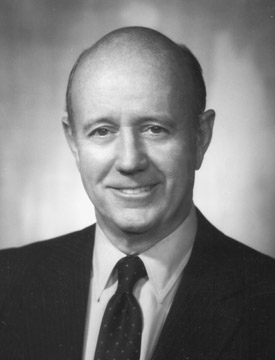 An icon in the broadcasting industry, Tom Murphy gave “birth” to a fledgling broadcast company, Capital Cities in 1954. It is hard to believe that this telecommunications giant almost went bankrupt in its first three years. Over several decades, and as a result of many brilliantly crafted deals, Tom, who became President of Cap Cities, gradually built the company into a telecommunications empire. In 1985 he engineered the purchase of ABC with the backing of his long-time friend Warren Buffett, and the company became Cap Cities/ABC. He describes it as the “minnow that ate the whale.” Ten years later, Tom sold Cap Cities/ABC to Disney for approximately $19 billion. Mr. Murphy was named New York State Broadcasters Association’s “New Yorker of the Year” in 1986.