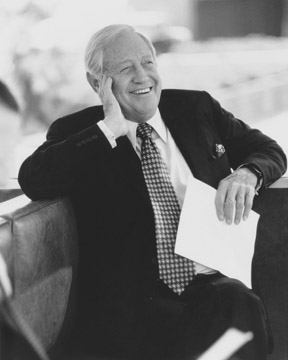 Bill Paley (1901-1990) was named by Broadcasting & Cable magazine as “one of the two most important men of the millennium” in the broadcast field. He is the “father” of CBS and the founder of The Museum of Television and Radio in New York City. Under his tutelage, CBS’s prime time dominance lasted for almost 20 years and brought many of America’s favorite shows to the television screen including Our Miss Brooks, Gunsmoke, Ed Sullivan, I Love Lucy, 60 Minutes and more. In a 1999 retrospective Broadcasting & Cable magazine summed up the Paley era: “During its prime time, CBS made more money than any other broadcasting network, dominated the schedules, won in entertainment and news and was the industry’s leader in innovation and policy.”